Life without a safety net

I’ve been thinking a lot recently about how it felt during the riots in England in 2011 when, as the violence, burning and looting spread across London and to other cities, the police stopped responding. You could call 999 and say “There’s a mob outside my house and they’re destroying stuff.” and nothing would happen. It felt really scary. The people that are supposed to protect the population just decided not to. It was suddenly apparent how fragile is the line between order and disorder, safety and danger.

I remember, too, a ‘Grants not loans’ march I went on as a student in 1988. We were kettled by police who then surged into the crowd on horseback. We had no where to escape to, because there were thousands of us and buildings in the way. I remember seeing a mounted police woman beating people with a baton, her face distorted with hate. I remember shouting “We can’t go anywhere! People are being trampled!” And they kept coming at us. It felt really scary. The people that are supposed to protect the population were deliberately trying to hurt us. It profoundly rocked my middle class view of the world. It was a shocking experience.

No safety net. Being under attack from the people that are supposed to protect you. Two short-lived experiences that disrupted my normality for a while. I wonder if they offer a glimpse of a tiny fraction of what it must feel like to be a black person in America. 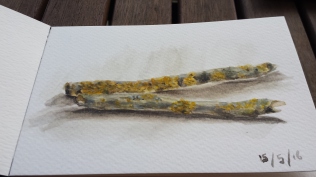 My sister gave me a miniature water colour sketch pad and pocket-sized box of water colour paints for Christmas and it’s taken me until now to crack them open and have a go. My first attempt (above) turned out better than I thought it would, despite one of my girls grabbing the sticks part-way through. Even while I was doing it I was pretty sure it was going badly wrong but I kept going because it was fun. Definitely plenty of room for improvement, but I really enjoyed it and was pleasantly surprised by the result.

Labour needs Corbyn – we all do

Something interesting is happening in UK politics and the media and Westminster are so out of touch they’re failing to notice. There is a widespread assumption made by many journalists, the Tories, most Labour MPs and Tony Blair that if Jeremy Corbyn wins the Labour Party leadership election it will render Labour unelectable. In fact the opposite is true: Corbyn is all that stands between Labour and permanent irrelevance.

There is a huge under-estimation of the tremendous thirst in this country for a compassionate, conviction politician to provide leadership from principle and belief, not tactics and fear. So much talk these days is about how disastrous a shift to the left would be for Labour. But it’s not a shift to the left, it’s a redressing of the balance that has tilted so far to the right that even the middle ground is seen as left wing. Labour is a left wing party – or should be. Corbyn is a left wing politician. “Left” is not a dirty word. Labour should not be afraid to be left wing – that is its role. Otherwise democracy ceases to function. It is this very rejection of being left that caused Labour’s disastrous election result and is now causing it to drift around aimlessly trying to catch whatever political current it thinks will get it elected. That will never work. The electorate is largely not as stupid as most politicians think.

Why did all of Scotland turn to the SNP in May? Why are Corbyn, Nicola Sturgeon and Mhairi Black cheered like rock stars everywhere they go? Why are so many English people joining the SNP? Certainly not because Labour is too left wing.

Labour needs to stop being terrified of the UK press. They will blast and ridicule a Labour Leader whoever it is. They are much less powerful than they used to be.

And they need to challenge the ubiquitous narrative that austerity is the only answer – it’s no kind of answer – quite the opposite. If you think the deficit is costly, try extreme inequality and huge levels of poverty!

Corbyn is not afraid to puncture that bullshit bubble and propose a positive alternative. THAT’S why he’s experiencing a massive groundswell of support from people all around the UK. Finally someone has come forward to lead who is guided by something much deeper than newspaper headlines and opinion polls. He’s like a stream of fresh water flowing across parched ground. Thank God.

Overheard at the crafts table…

My girls were up at 6am this morning as usual (because New Years Day lie-ins are for wimps) and by 8am they were busy gluing googly eyes onto feathers and cardboard crowns. Here’s a snippet of their conversation which amused me:

This picture has taken a looooong time – it was supposed to be a birthday present for my mum last September but I only just finished it today. I get so little time for this kind of thing at the moment. It didn’t quite fit on my scanner, but you can see most of it here.

Pope Francis’ cover story in Rolling Stone magazine and the reaction to it on my Facebook timeline, has prompted me to put down in writing what I feel about him.

Essentially, it’s the same as Cornel West, who is quoted in the Rolling Stone piece and described as “long a leading voice on the Christian left.” West says “I don’t want to fetishize the pope. He heads a deeply patriarchal and homophobic organization that I’m critical of. But I love who he is, in terms of what he says, and the impact of his words on progressive forces around the world.” Yes, that, basically.

END_OF_DOCUMENT_TOKEN_TO_BE_REPLACED

You will need some chunks of baked butternut squash, some chunks of feta cheese, some pasta spirals (cooked obviously!), some finely chopped spring onions, some pieces of crispy lettuce and some shredded fresh mint leaves.

Bung it all in a bowl and mix.

Make your dressing out of olive oil, a little balsamic and a dollop of hot mango chutney.

Mix it together and wait a bit before eating it.

Here’s a new picture I finished this evening. (I say new, but it’s taken me nearly two months.)